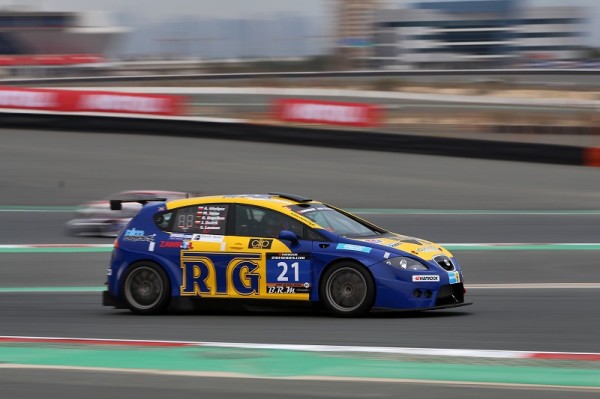 Qualifying for tomorrow’s 24-hour marathon at the Dubai Autodrome track started exactly at 13:15 Polish time. While training and free trips as the whole team found that for the best grid positions will compete for the most experienced of the five players: Adam Gładysz and Robertas Kupcikas.

Be the first behind the wheel of a 330 horsepower SEAT Leon Supercopa sat down multiple racing champion Polish – Adam Gładysz. The whole session was scheduled on fairly short 30 minutes because Gładysz left the pit lane just after ignition of the green lights. After 15 minutes, the team captain returned to the pits to refuel the car and exchange of Robertas Kupcikas.

At this stage of the competition the Polish team held a high second place in the classroom A3T and lost to the German team rider BMW E46 M3 just over 0.2 seconds.

Refuel and change drivers ran very smoothly and after less than a minute Robertas Kupcikas was on the track warming up new tires. Volkswagen Golf Cup champion from 2014 years defeated two fast wheels, which managed to improve X-ray unit time to Gładysz Racing by 0.1 seconds. This was not enough to hop on a virtual pole, so Kupcikas opted for another exit into the pits just before the posting of the flag in white-checkered. 4 minutes before the end of Guillaume Roman of Peugeot established a very good 0.4 seconds slower time than the Polish team, which is why Kupcikas decided to test one more lap, where he received the best time of 2: 15.164

Tomorrow’s task that stands before representatives of the class A3 will certainly not be an easy one. In this year’s edition of the 24H Dubai race Hankook will be attended by a record number of entrants. At the start of state for 100 cars. Under these conditions, focus and concentration will be needed by the whole distance competition. Tomorrow’s struggles start Robertas Kupcikas that Adam Gładysz change. Subsequently, the SEAT Leon Supercopa will be hosted by Marcin Jaros, Jerzy Dudek and Simon Larsson.

Polish team competing in Dubai can be traced through the official website http://www.24hseries.com/24h-dubai.

ADAM GŁADYSZ - just completed a qualification for today’s 24-hour race in Dubai. We took a very high second place with minimal loss for the first team, which went very fast BMW E46 M3. In this session, our team represented the me together with Robertas. We managed to obtain very similar times with a difference at the level of 0.150 seconds. At the end of the day, there were two last hours of night training, in which more of us rode Marcin Jaros, Jerzy Dudek and Simon Larsson. In general, today the whole team did a great job. Tomorrow we start with a short warm-up, but about hours. 11.00 Polish time we start the 24-hour race, which I hope, will result in success for us.

Robertas Kupcikas: - It was a good session for us, have done a decent job. Thanks to the mechanics of the Volkswagen Racing Poland our the SEAT Leon Supercopa was perfect and established a second time in our class, with a small loss to the fastest. However, this was not important, because the race is very long. The main objective is to win the race tomorrow and we will try to do everything in our power to make it happen.