Polish crew to Gładysz Racing RTG supported by Volkswagen Racing Poland ended the 24-hour race on the track in Dubai on a magnificent third place. Daily competition was full of many adventures, but the team using SEAT Leon Supercopa great coped with all the challenges and celebrating another success in the class A3! 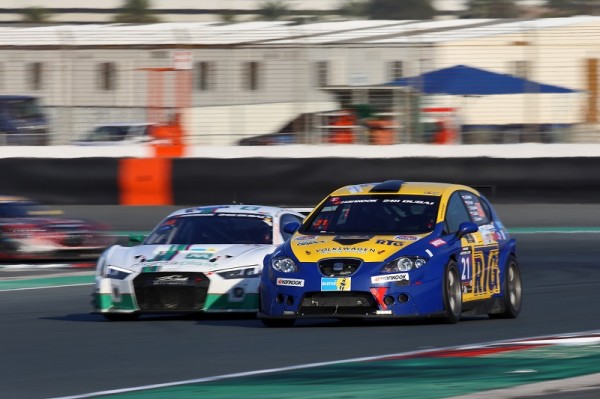 The crew of the SEAT Leon Supercopa since the beginning of the weekend showed that the goal is the highest ranks, which was confirmed during qualifying, when the good times Robertas Kupcikas and Adam Gładysz gave the Polish team a second starting position in the classroom. The fight in the race, however, was not to be easy. At the start of Hankook 24H Dubai appeared in as many as 100 cars, and so long and debilitating rivalry is crucial to maintain the maximum concentration.

On Friday, punctually at. 14:00 local time, the competition started. The RTG to Gładysz Racing responsibility by opening race fell on the shoulders of Robertas Kupcikas that after the first few laps remained in third place in the classroom. After two hours SEAT Leon SuperOP took Adam Gładysz and during their shift was able to break through to the second place. The next in the queue behind the wheel was Marcin Jaros, who managed to take the lead in the class!

During the following laps the team shuffled from rivals on the first and second place depending on the current sequence of visits to the pits. Unfortunately, after about seven hours, when the car sat Jerzy Dudek, there has been a failure of the transmission. Although the SEAT Leon Supercopa has been designed for the express removal of possible defects, and the mechanics of Volkswagen Racing Poland did a fantastic, it was a huge loss of time, so the chances of fighting for victory dropped to virtually zero.

It is, however, little has changed for motorists team who, after problems were even more determined. During any subsequent changes Robertas Kupcikas, Adam Gładysz, Marcin Jaros, Jerzy Dudek and Simon Larsson gave their all so that they could make up at least part of the losses. That made it on Saturday at 14:00 – after 24 hours of murderous rivalry – yellow-blue SEAT León Supercopa entered the finish line in third place in the class A3 giving your team a podium in the Hankook 24H Dubai!

ADAM GŁADYSZ – Hankook 24h Race of Dubai is behind us. We finished it in third place, with which we are very pleased, but of course our goal was to win in the classroom. We had some problems that prevented this, but our mechanics did a great job removing the fault, and besides, the SEAT Leon Supercopa turned out to be a very good car. I would like to thank the whole team, partners, sponsors and my family, the other drivers, which changed the wheel. It was a huge challenge that we managed well myself. We are going home happy, trophy and I hope to meet you here next year!

MARCIN JAROS: - We’re at the finish of this murderous race. For sure it was not easy, but everyone gave their all. Because of the problems we ran the chance of victory, however, and so we managed to get third place. It’s a great way to start the season and we are incredibly happy! I would like to thank everyone who cheered me during the race, the mechanics working hard on our joint success – did a great, as well as drivers for their excellent drive through the whole 24 hours.

Robertas Kupcikas: - The race was very difficult. We had some problems as riding non-stop for 24 hours a demanding car, but in the end the team did well with it all. We reached the finish line in third place, with which we are very satisfied. We hope that the next of our team will be even better!

Jerzy Dudek: - We have just Hankook 24H of Dubai, during which a lot was happening, but we were able to realize our objective was to drive to the finish line. But it’s important to make it to the end will not give up. So we did and we were able to get back to third position. It was my debut in long distance races, as well as a new car that is for me the SEAT Leon Supercopa and I think it came out pretty well. We can say that it is only in third place, but here everything depends not only on the speed, so the whole team is very happy, because in these conditions it is up to third place !!

SIMON LARSSON: - Even though a gearbox failure we managed to finish on a very good third. It was my first 24-hour race and I’m happy with it. My ride during the change was good, my team mates did a great job, so we can enjoy the podium in the class A3.